Where the forest meets the sea

The museum’s neighbouring area offers wooded roads, seaside overhangs and sandy beaches, hiking trails, bicycle paths, and splendid views. Spending time in this green oasis south of Aarhus is an excursion in itself. One route begins with a walk around the modern museum building, runs down to the park around and behind the old Moesgård Manor, then goes on to the old water mill in the forest, Skovmøllen, which in addition to the restored mill is home to a very popular restaurant.

Another interesting route is the Prehistoric Trail (Oldtidsstien), which leads visitors on a walk past burial monuments and reconstructed buildings from ancient times, along a striking forest path that runs from the Moesgård estate all the way down to the sandy beach.

About the Prehistoric Trail

The lands of the Moesgård estate cover some 100 hectares (nearly 250 acres) of parkland, forest, open fields, shorelines, and beaches. The area stretches from the museum’s buildings down to the sea.

The Prehistoric Trail is about 4 km long. Winding its way through the varied landscape, this trail takes visitors past interesting sights as it passes through some of the loveliest natural surroundings East Jutland has to offer. To take this trail, follow the white rocks marked with a red spot.

Along the way, visitors pass the mill at Skovmøllen, reconstructed buildings from ancient times, and actual relocated monuments – such as the dolmens known as Kobberupkisten and Stigsnæsdyssen, which have been moved to the Moesgård estate because they could not be preserved in their original settings. The ancient trail ends at the reconstructed Danish stave church.

Signs along the Prehistoric Trail offer information about each structure or monument. 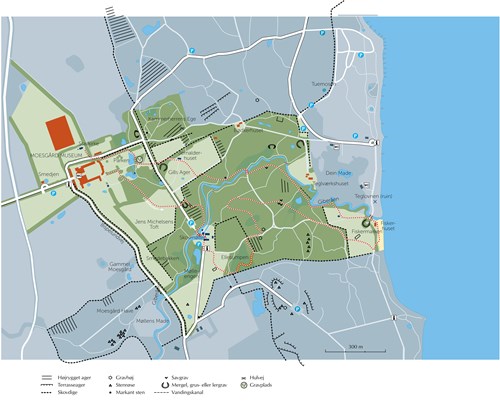