The new special exhibition at Moesgaard Museum spotlights a dark period in European history. A period of wars, power battles and waves of refugees, but also a period of dreams, hope and vast quantities of gold.

Between the Fall of the Roman Empire and the Viking Age

Moesgaard Museum’s new major exhibition, titled Out of Chaos, opens on 12th November. It focusses on one of the most fascinating and complicated periods in Europe’s history, when the mighty Roman Empire collapsed in the west, new warrior aristocracies emerged, and the foundations were laid for the Europe we know today.

The special exhibition looks at a period of about 300 years, beginning in the late 4th century AD. Between the fall of the Western Roman Empire and the dawn of the Viking Age. A time referred to as the Migration period, due to its great wars, floods of refugees and territorial displacements.

The theme fits well into Moesgaard’s sequence of special exhibitions, where it is the museum’s ambition to provide its visitors with an insight into the great connections and correlations in world history.

The coming exhibition explores the chaos out of which modern Europe was born.

“In this exhibition, we look one of the greatest crises ever in European history. A time when most of the continent was embroiled in violent change and unrest. But out of this widespread chaos emerged a wealth of peoples and identities, many of which are still recognisable in Europe today. In the exhibition we hope to provide a deep historical insight into some of the differences and tensions that continue to shape our present. As well as providing a perspective on the great historical consequences of major crises up through time. Something that is, unfortunately, extremely relevant right now,” says Mads Kähler Holst, director of Moesgaard Museum. 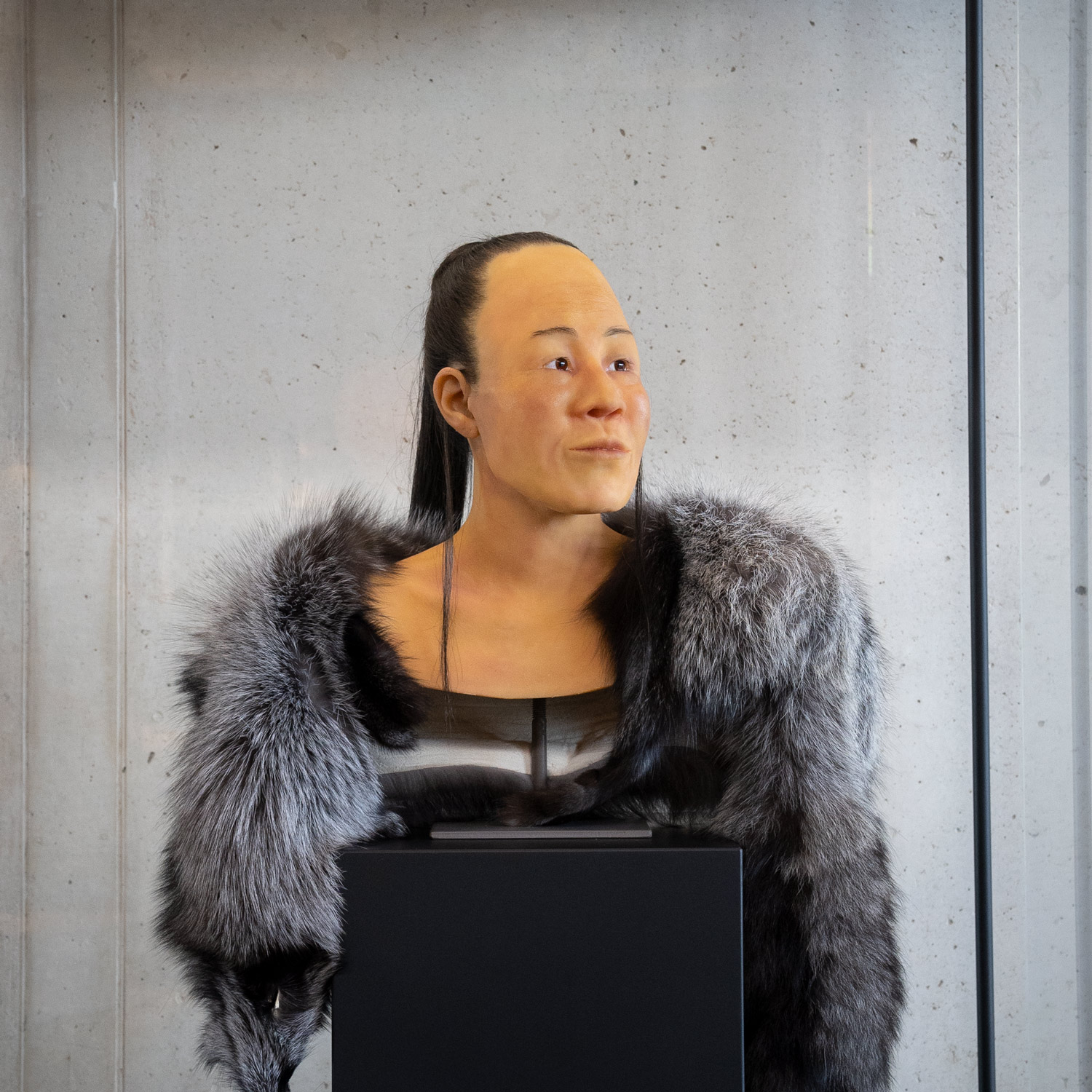 Reconstruction of a Hunnic woman. This Hunnic woman belongs to one of the first generations of Huns to arrive in Europe around AD 370. To comply with the contemporary Hunnic beauty ideal of an extremely elongate head she had her head tightly bound during the first years of her life. Photo: Moesgaard Museum.

Out of Chaos takes its point of departure in AD 376, the year when mounted Hunnic warriors drove out the Goths, forcing them to flee across the Danube and into the Roman Empire.

Visitors are pitched directly into the dark world of the Migration period, brimming with chaos and violence, dreams and hope. A time when gold flowed from the Roman Empire in a constant stream to the peoples living around it, who then employed all means to demonstrate how they could match each other in displays of magnificence and splendour. When the dreaded Huns, the mounted warrior tribe from the east, through their pressure on the Goths, sparked power battles in which Scandinavians also became involved and, not least, experienced the fallout from. This was also the time when the Danes entered the historical stage, and the defensive earthwork Danevirke was built, presumably as a shield against the chaotic situation to the south.

Although the Huns and Goths were central players in these struggles for power, many other actors were also involved. There was not one reason but many for the Western Roman Empire’s downfall.

Out of chaos, a new order was born, and a mighty empire became several kingdoms that, with time, developed into the nations we know today. 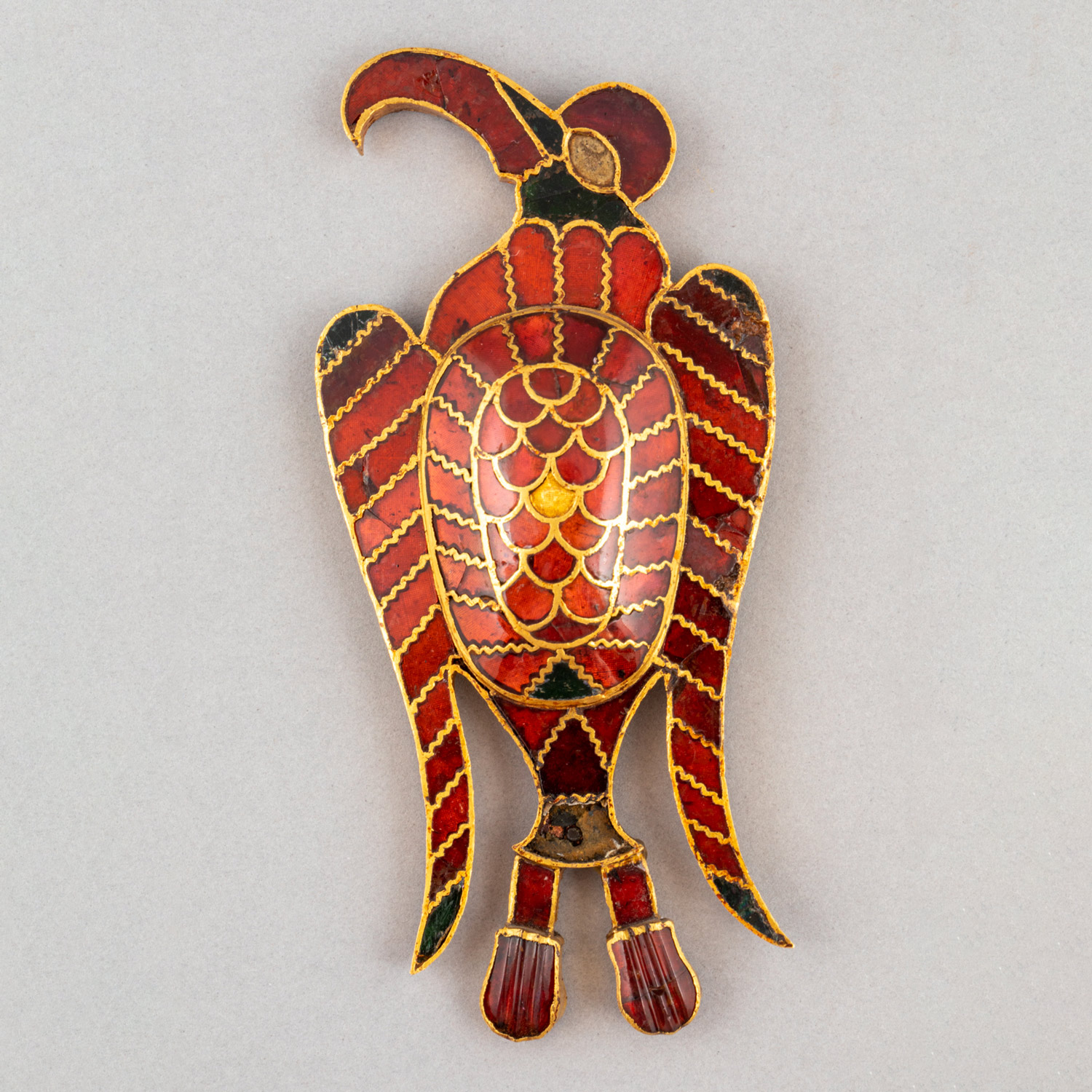 Fitting in the form of an eagle. For harness or saddle bag. Gold with inlaid almandines and eye of green glass. From a grave at Apahida, Romania. AD 450-475. Photo: Marius Amarie, MNIR 2022.

For this special exhibition, Moesgaard Museum has archaeological artefacts on loan from museums in Sweden, Romania and Hungary, as well as the National Museum in Copenhagen. These include impressive gold treasures from Romania, a Hunnic skull from Hungary and a warrior’s helmet from a boat grave at Valsgärde near Uppsala in Sweden.

The exhibition is supported by

The special exhibition Out of Chaos opens to the public on 12th November 2022. The exhibition is supported by Augustinus Fonden, Aage og Johanne Louis-Hansens Fond and Kroagerfonden.

The special exhibition can be experienced until 6th August 2023.

Warrior’s helmet from Valsgärde The helmets from the warriors’ graves at Valsgärde are renowned for their rich ornamentation, which has rendered them some of the most iconic artefacts from 6th-century Scandinavia. On loan from Gustavianum, Uppsala University Museum, Sweden. Photo: Gustavianum, Uppsala University Museum, Sweden.