Bound for disaster – Pompeii and Herculaneum

One of the world’s most famous archaeological sites is on display at Moesgaard Museum until September 13 in the special exhibition 'Bound for disaster – Pompeii and Herculaneum'.

Moesgaard has been given the opportunity to display spectacular exhibits from Italy, and the exhibition takes visitors on a tour of the vibrant city of Pompeii at its absolute height. Here, the Romans gathered the threads of contacts across the Mediterranean, and here they lived the high life – la dolce vita – before disaster struck the Bay of Naples in AD 79, and both Pompeii and Herculaneum were destroyed when the volcano Vesuvius erupted.

Very few cultural treasures from prehistory and classical antiquity survive to a degree that enables us to look back today and experience everyday moments and events that took place many centuries ago. The Roman city of Pompeii on the Bay of Naples is one of them, and its ruins provide a rare and legendary snapshot of Roman daily life.

In AD 79 the volcano Vesuvius erupted and discharged explosive waves of volcanic ash and rock out over the Bay of Naples. The citizens of the towns of Pompeii and Herculaneum and the surrounding rural settlements became victims of the eruption, perceived as the end of the world. Snapshots of these flourishing towns and the victims, captured and frozen in terror as they fled from the scorching lava and ash, have – ever since the first excavations of the towns in 1592 and the scientific investigations initiated in the 18th century – attracted the world’s attention, and the ruins of the towns have since been visited by millions of tourists. 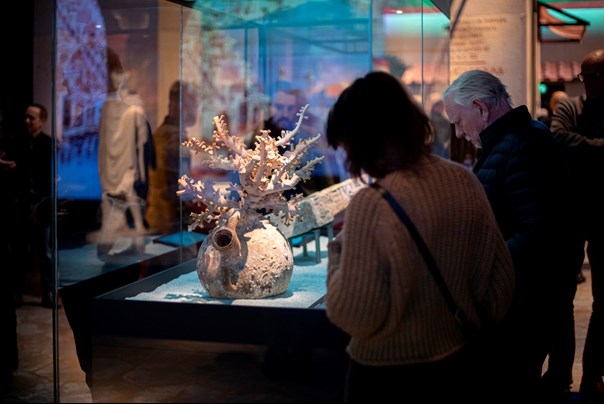 In Moesgaard Museum’s exhibition, visitors are able to view artefacts from both Pompeii and Herculaneum that have never previously been shown outside Italy.

Research into the two towns has produced new information that has revised our understanding of the towns and the disaster, including when the volcanic eruption took place, as well as its nature and the actual sequence of events. Recent investigations of those who died in Pompeii have yielded new, ground-breaking details of the town’s citizens, while similar research on Herculaneum’s dead has resulted in a revised interpretation of a heroic rescue operation launched by commander-in-chief Pliny the Elder, stationed at the Roman Naval base of Misenum on the opposite side of the Bay of Naples.

When Vesuvius erupted, Pliny immediately set sail at the head of a fleet of warships with the aim of saving as many people as possible from the doomed towns. We know of his rescue operation from letters written by his nephew Pliny the Younger to the politician and historian Tacitus, in which he tells of his uncle’s heroic actions. Tacitus cites the letters in his work Historiae about the first centuries of the Roman Empire.

The letters are firsthand accounts of the disaster, the rescue attempt and the dramatic events, day and night, hour by hour, that engulfed the people of the Bay of Naples. It is also the earliest documented military rescue operation involving civilian victims of a natural catastrophe. The deployment of the fleet provides a vivid example of the navy’s function in the Roman Empire and the role of Pliny the Elder as naval commander.

The special exhibition at Moesgaard Museum presents the towns of Pompeii and Herculaneum from a perspective focussing on the Roman Empire as ruler of the Adriatic and the Mediterranean. The expansion of the navy provided the foundation for the Roman lifestyle – a slave-based society, in which consumer goods, luxuries and forced labour flowed in enormous quantities across the Mediterranean and furnished the entire Roman Empire. Pompeii and Herculaneum benefitted hugely from their location in the place where trade flourished – until disaster struck. 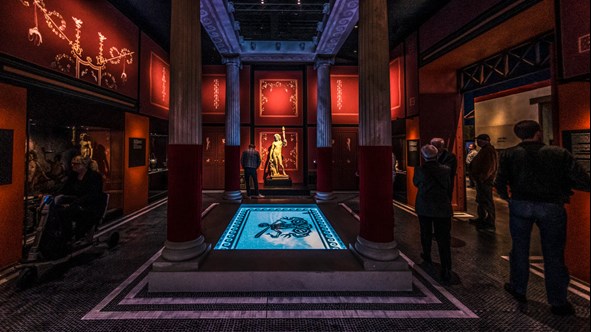 One of the world’s greatest stories

The exhibition presents more than 250 objects on loan from seven Italian museums and cultural institutions. Visitors will be able to view reliefs and gravestones bearing inscriptions that provide vivid descriptions of and information about family relations, frescoes featuring maritime motifs, landscapes and everyday situations, military and maritime equipment and cargoes of commodities from distant destinations and the commercial harbour at Naples. There are also mosaics and marble statues, fountains and figures related to mythology and cult, together with jewellery and other luxury goods from the Romans’ high life before the cataclysm.

The exhibition also includes exhibits demonstrating the terrible consequences of the volcanic eruption, including casts of corpses from Pompeii and skeletons of the dead from Herculaneum.

The special exhibition on Pompeii and Herculaneum is produced by Moesgaard Museum with loans from the following Italian museums and cultural institutions: