Moesgaard Museum is currently reconstructing Høj Stene - one of Northern Europe's largest burial monuments from the Iron Age. The burial monument is open to the public from the autumn holidays and onwards. It is situated at Gudenåen by Vejerslev.

Høj Stene is a rediscovered burial monument, which is shaped like a ship - a so-called ship setting. The site was already mentioned in records dating back to the 17th century, but some of the large stones of the burial monument were removed over time, and the exact location fell into oblivion.

Gold finds from the Iron Age

In recent years, archaeologists from the Moesgaard Museum have rediscovered the site of the ship setting. This was done using a kind of radar apparatus that could detect where the stones of the ship setting had stood, and the results were confirmed by archaeological investigations on site.

In the middle of the ship setting, archaeologists found pieces of gold that shows that the monument was used as a burial ritual for a powerful person - possibly a king or queen – who, at that time, ruled in central Jutland.

Most of the gold has melted because it was exposed to very high heat on a bonfire, but smaller pieces of gold have been preserved. On some of the pieces there is an ornamentation, which shows that the burial took place in the later part of the Iron Age, around the year 600. 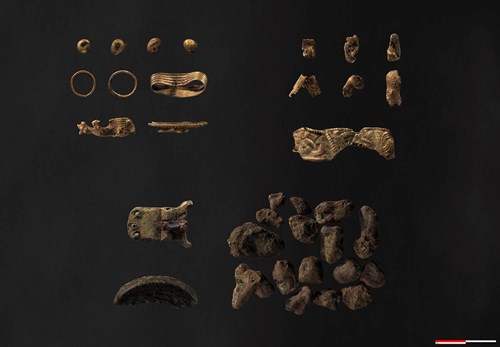 Feel the presence of history

It will be possible to visit the monument once again, when Moesgaard Museum finish reconstructing the ship setting with stones as high as 2-4 meters placed in an 80-meter-long pointed oval formation. The stones will be erected during September and will open to the public in week 42.

“It is difficult to comprehend how large this monument is without a reconstruction. Therefore, we are incredibly happy that A.P. Møller and Wife Chastine Mc-Kinney Møller's Foundation for General Purposes chose to support the reconstruction of the ship setting. This ensures that this unique piece of Danish history is disseminated to the hopefully many visitors and preserved for posterity. Once the stones are more than two meters high in a ship formation, I think we will be surprised at how impressive this monument has actually been,” says director Mads Kähler Holst from Moesgaard Museum. 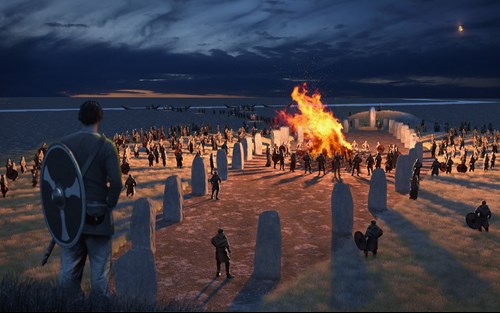 Important tourist attraction in the municipality

In Favrskov Municipality, they welcome the reconstruction of the monument and have established a new path, created PR materials, and put up signs for what they hope can become an important tourist attraction in the municipality.

“The re-creation of Høj Stene is completely unique and has the potential to really put Vejerslev and Gudenåen on the map of Denmark. A big thank you must go out to Niels Due Jensen from Ormstrup Estate, who owns the land. He has made it possible to reconstruct the monument in its original location and I hope that visitors from near and far will have a spectacular experience here. An experience that encompasses nature, culture and history. ” says Nils Borring, mayor of Favrskov Municipality.

Both the archaeological and geological investigations as well as the reconstruction of the monument have taken place with the support of A.P. Møller and Wife Chastine Mc-Kinney Møller's Foundation for General Purposes.

The recreated ship setting will be inaugurated at an event for foundations, press and special guests on Thursday 8 October at 14.00.