Viking Stone from Aarhus made a round-trip to space

Moesgaard Museum has its very own space story to tell in the celebration of the 50th anniversary of the moon landing.

In 2015, a whetstone from the Viking Age's Aros (Aarhus) joined Denmark's first ESA astronaut, Andreas Mogensen, when he spent eight days aboard the International Space Station ISS. This makes the stone the thing from the Viking Age to travel the furthest – ever! In 313 days, it circled the Earth 16 times a day, thus traveling over 200 million kilometers.

The pebble stone has its permanent place in the Viking Age exhibition at Moesgaard Museum, where you can visit the object today.

The stone was assigned to the custody of Andreas Mogensen at an event in the Concert Hall in Copenhagen on December 19, 2014. At the European Space Agency ESA's technical headquarters ESTEC in the Netherlands, it was examined for durability and possibly content that could endanger the astronauts. The small slate stone, however, passed the tests with flying colours. 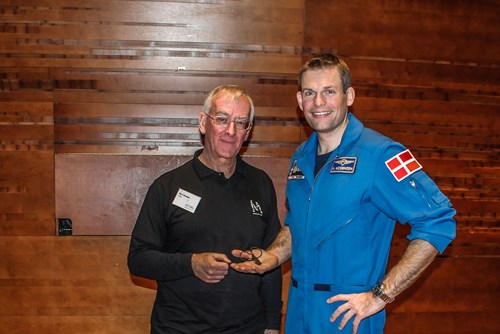 Andreas Mogensen chose a Viking motif with a ship for his space mission, and he wanted to bring one thing with him that related to the Viking Age. The choice fell on a utility tool that is small, light and robust.

The Vikings were the astronauts of their time. They were travelers who found new territories and explored unfamiliar areas after enduring great hardships. They returned with new knowledge, with valuable things (which they had not always obtained in a peaceful way), and they went on outward journeys bringing people and animals to colonize new land. 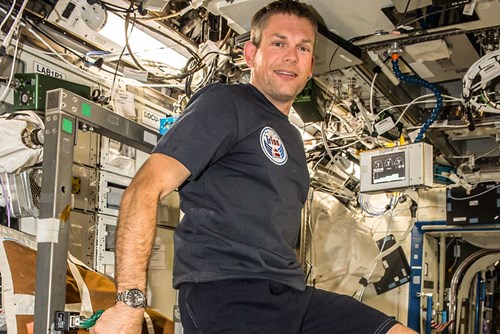 From Norway to Denmark and beyond into space

The whetstone is of Norwegian slate, and it is in its own way a traveler, both in time and space. It has traveled from the quarry in Norway to Denmark and may also travelled further on the belt of its Viking; maybe to York in England, to northern Germany or even to Byzans in the Eastern Roman Empire. Lost in a gutter in Aros, it was forgotten for the long time - more than 1,000 years - until the excavator destroys peace.

Now the stone is one of the relatively common, yet treasured finds, at Moesgaard Museum in Aarhus. It has a registration number, its provenance (origin history) is written in the database, and it can now be seen at Moesgaard Museum.

The whetstone and other cultural items were launched to the ISS on an unmanned Russian supply ship, the Progress M-28M 60P on July 3, 2015. They arrived at the ISS Space Station on July 5. The items were returned to Earth again with the supply vessel Dragon CRS-6 from the private American company Space-X, landing on May 11, 2016. On September 2, 2016, the items were delivered back to their owners at an event at the National Museum in Copenhagen. 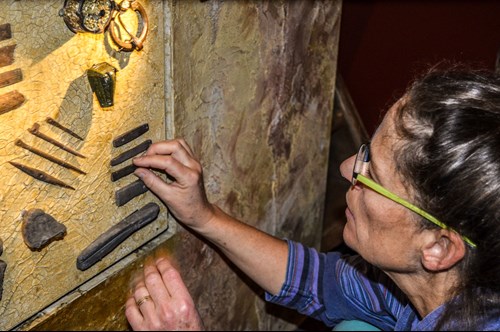 Viking lost the whetstone in Aarhus

The whetstone was probably lost by a Viking, perhaps because the belt through the hole broke. Everyone has had such a small whetstone either in a belt, in the pocket or in a purse. It has been necessary to whet one's knife or dagger - but it was too small to sharpen a sword. For this, larger stones have been used, but of the same slate material.

In the Viking Age, there was an extensive import of slate stones from Norway to Denmark, so the stone was probably imported. With great care, a local craftsman drilled the hole and put a leather strap in, and then the stone was sold to a customer.

At the start of an emergency excavation in 1994 at Store Torv in Aarhus, the upper soil layer was excavated with an excavator and drove it away without sieving the material. Through a stroke of luck, archeologist Hans Skov found this stone - and a few coins at the same time. Unfortunately, a lot of smaller items may have been lost at the same time.